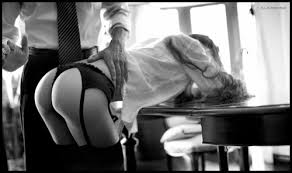 In a silent, dimly lit room, the only trace of light comes from the faint light that is emitting from the security bulb that is having its rays sipping through the linen curtains. The only rising energy is the warmth of breath and the only movement is of the room’s two human occupants. Sharing intimate emotions so strong and lethal it is like a Python’s muscles.
The guy slowly drops to his knees and holds the woman by the waist. His face is facing directly her enchanted kingdom. Garden of Eden. He reaches behind her skirt and plays with its buttons, pulls down her zip and eases the tension that is building. A few seconds later when it has come loose, he slides his hands into her inner thighs and works their way upwards. They reach her knickers and slowly dig in and pull them down. Slowly.
At this moment, he gets up, sits on the bed and drops her ass down next to him. He turns her and lays her belly flat on the soft bed.
He then proceeds to lift her skirt to her waist leaving a faint, dark contour online of her butt in the dim surveillance of the room. He raises his hand and softly drops it down on the hill shaped butt in front of him. She giggles. He’s horny. He raises again and this time drops it down a bit more harder and he could feel the warmth rushing through his palms.

She moans and stiffens a gasp. It is working on her. The pain she feels is like the antidote. It is like venom. The blood rushes through her. She knows it from the warmth and sweat that is running through her body.
A few more rounds of spanking her keeps their emotions rising and just as he is about get done, he hits it one last time, this time harder & his hands just cup the hot, round mound as he finally drops down beside her for further duties.